Here are Mehndi video and pics of Muhammad Amir

LAHORE: Pakistan star cricketer Muhammad Amir’s wedding function is on card now, as he had a grand Mehndi function at his Lahore’s residency last night.

We shared some of the pictures from the event yesterday, but we have now received the video and more pictures from his last night’s nuptial function. 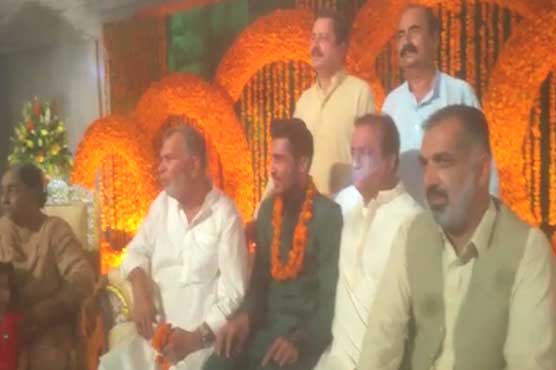 As per the slated function plan, Amir is set to bring his wife home yesterday whom he had tied not with two years ago in London.

Amir’s better half Narjis met him at a family event six years ago. Their relationship spiraled from there and the two got married in a Nikkah ceremony two years ago.

Narjis, who is a Pakistan-born British national, is a huge fan of cricket, and attends Pakistan matches to cheer for his fiancé.

Amir will dress in a golden sherwani in one today’s ceremony; the couple will fly off to Dubai after September 21.

“I felt it was the right time for me to get into a relationship,” Amir had told The Express Tribune in an earlier interview. “One has to get a life partner at some stage of life, so I decided to do it now. I didn’t feel the need to wait any longer.”

16 knifed to death by rebels in east DR Congo

16 knifed to death by rebels in east DR Congo